Unforgettable Village Experience in the hills of Jim Corbett with Lakhori Chilli – the well-known yet mysterious Yellow chilli!

The Lakhori chilli is quite a well-known local chilli variety, even though there is very little information available about it on the web. So we can call it the mysterious Lakhori Chilli. Struck by a heightened curiosity, let’s learn about the chilli that can add remarkable flavor to your culinary adventures!

The Lakhori mirch is well known in the Uttarakhand towns of Bhikiyasain and Sult (chilli). The famed chilli grows only in these locations, despite vain attempts to do so in other areas; the former is a tehsil, and the latter is a block in the state’s Village Dudhodi, Almora district near Vatsyayana Resort.

The Lakhori mirch differs from the other varieties in that it gets a specific type of wrinkle on drying. The word “Lakhori” derives from the fact that this chilli variety was first cultivated in the Garhwal region’s Lakhora village.

Why do we call this Lakhori chilli (yellow chilli or peeli mirch) the mysterious chilli?

Well firstly because not many people know of Lakhori chilli’s existence. Secondly and surprisingly even the farmers growing peeli mirch did not know how it was being used and where is all the peeli mirch produce they are cultivating finally reaching. Our experience curated team  said that Capsaicin extracted from chilies is used in pepper sprays, while others claimed that the big town trader simply visits their farm, takes all of their peeli mirch, pays them, and leaves. What happens after that remains an enigma we resolved to put an end to.

Lakhori chilli has a distinctive yellow color, thereby giving it the name Yellow chilli. Though it is claimed to be extremely hot and found it to be pretty unpredictable. The famous Lakhori chillies from different villages in the region; are so hot that they can bring tears to our eyes while some were mild and piquant. 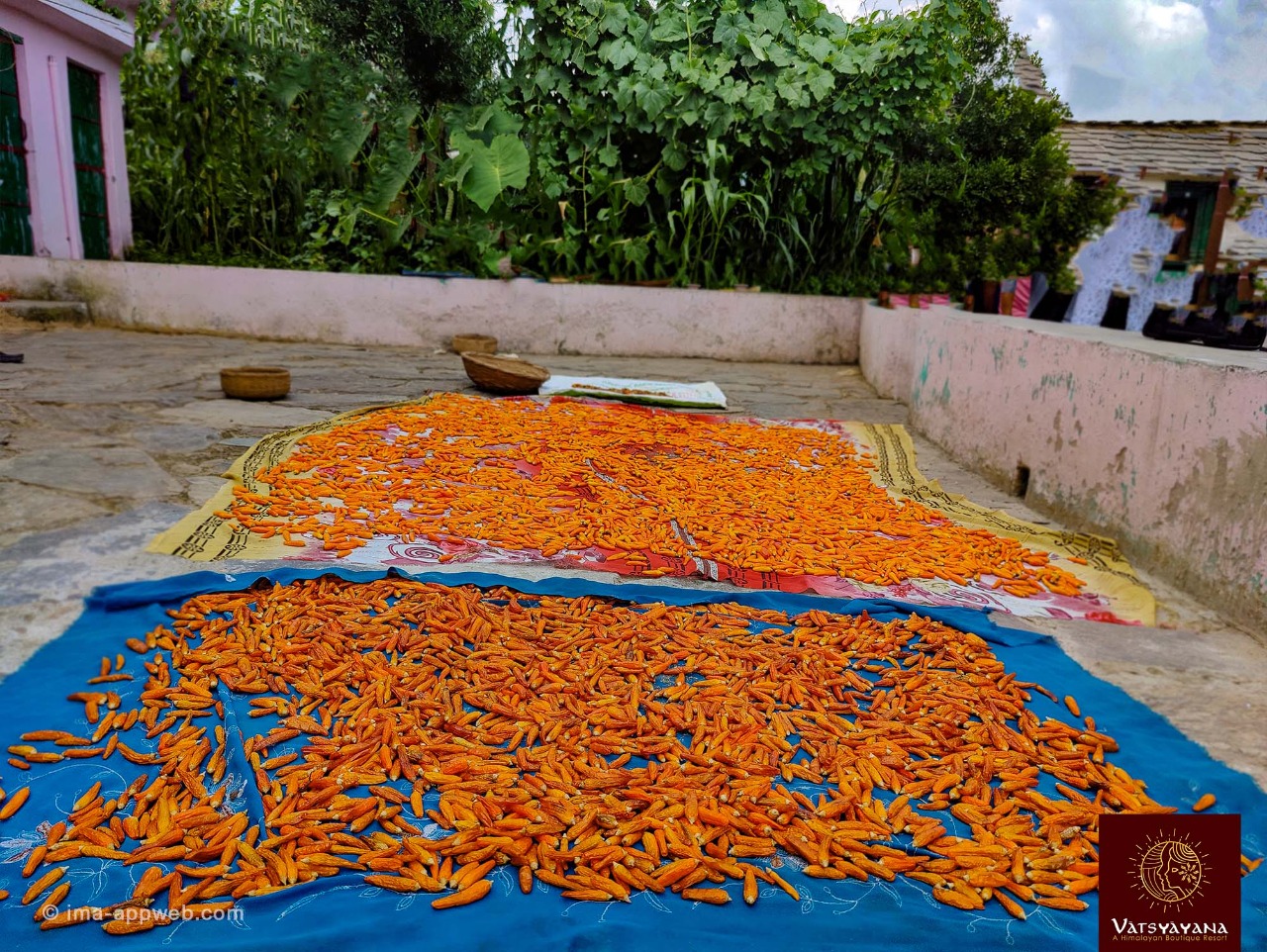 The Lakhori mirch can be divided into two categories based on their size. The smaller ones, called Lakori Jamri, are said to be utilized to manufacture chilli flakes because they have the most seeds. The larger ones, however, are either grinded into a powder or used whole as spices.

Growing chillies requires a lot of hard work in comparison to other crops. The sowing season varies but is usually around February to March; sown by scattering the seeds around. Harvesting starts in October. Once the chillies are harvested and sun-dried correctly, they can be used all around the year. The farmers say that if these chillies are dried again after a period of 2-3 months, they will never go bad thereafter. Cultivation of these chillies benefits them as Lakhori chillies are heavy and yield good financial returns for the farmers who sell them by weight.

The majority of local people use it in powdered form. This way, the heat gets balanced as the chillies vary on the pungency scale.  They also make a spicy pickle. It is perfect for adding to kadhi, curries and frying daal in oil as chhonk (tempering). The chillies also make a great garlic chutney, Moreover, it is said to give an unmatched flavor to non-vegetarian recipes.

In conversation with Rohitt Kumar, the chillies with more seeds are usually hotter than the rest. The chilli is promptly sold in the neighborhood market, where visitors from outside these communities come to purchase the products in large quantities. While the whereabouts and end use of the bought produce remains a mystery, we heard stories of the chilli going to Kanpur to be used for making tear gas.

For all the people who love their food hot, spicy and flavorsome, the Lakhori is a must-try!